Is 2018 the end for Brick-and-Mortar Retail?

Several big-box retailers are closing their doors this year, leaving a swath of empty real estate and jobs behind. As of April 2018, over 70 million square feet of retail space is scheduled to close this year, according to CNBC.

Some of the most notable closures include:

Consumer buying habits have certainly changed with the rise of e-commerce giant Amazon.com and other e-retailers. But even as long-established brick-and-mortar retailers face store closures, there are bright spots on the retail horizon.

Retailers catering to consumers' everyday needs have shown net growth in the number of stores from 2007 to 2017. As Statista's  Who's Surviving the “Retail Apocalypse”? chart illustrates, consumers still rely on dollar-type stores, convenience & gas stations and drug stores for staple purchases. 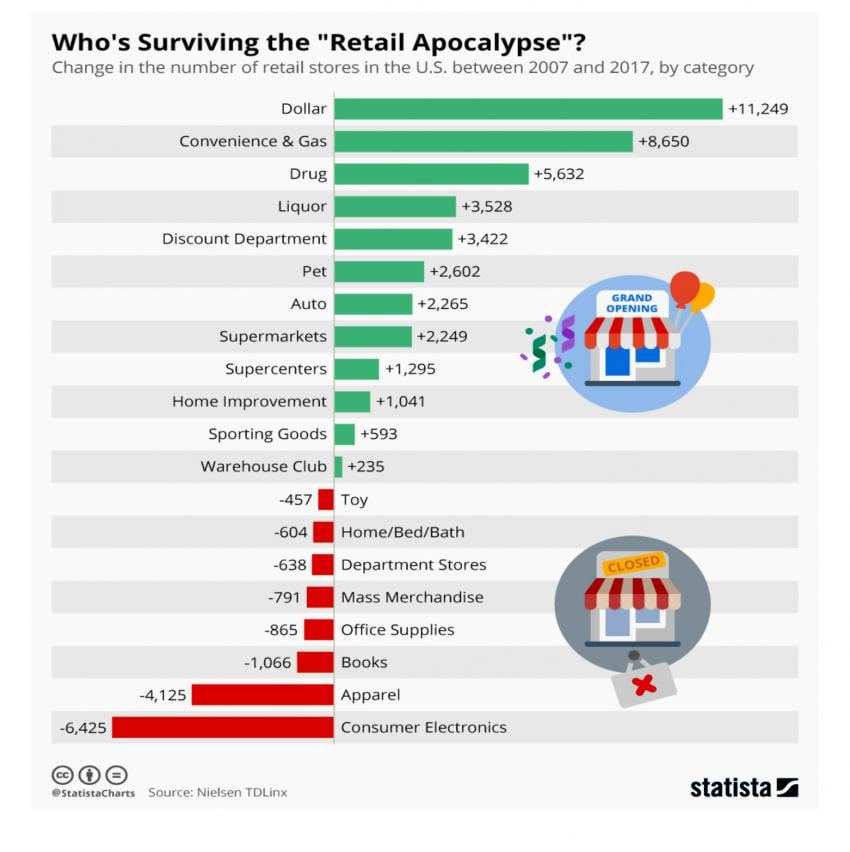 Brick-and-mortar pet stores have also been resilient to the rise of ecommerce and online shopping, showing a net growth of 2,602 retail shops in the 10-year period from 2007 to 2017.

And there is continuing growth for pet retailers such as Pet Supplies Plus, which is slated to open 50 new stores in 2018.

According to Pet Supplies Plus CEO Chris Rowland, “Pet parents shop with their pets not just because it’s convenient, but because they want social interaction for them and their pets. You can’t get that by shopping online.”

Retail sporting goods has been another growth industry, with nearly 600 new stores entering the market in the same time period. And Lucintel projects the sporting goods global retail market to grow at a compound annual rate of 3.4% from 2015 to 2020.

The landscape of traditional retail has changed and will continue to as technology assumes a greater role in our lives. But the personal touch is still the hallmark of brick-and-mortar retail.

“Customer experience is the one unique selling point for physical retail – combining technology and personal service into seamless customer journeys that excite emotionally, physically and socially,” according to The Retail Performance Company. “The mission of physical retail will be to make shopping surprising, exciting and human.”

Editor’s Note: We look forward to sharing and updating trending economic data, along with news from our more than 2,000 licensing partners, as it becomes available. Sign up to our newsletter!