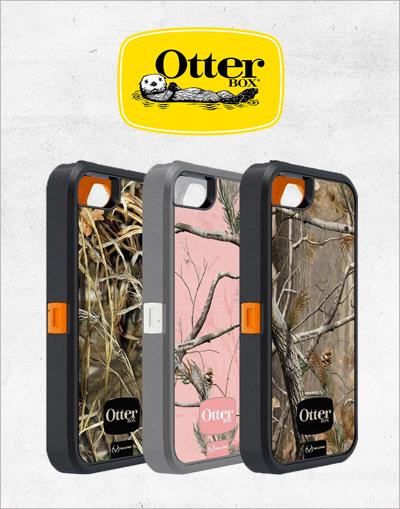 Otterbox designs, manufactures and sells cases that keep mobile electronic devices safe and dry. The company makes about 170 models of cases for cell phones, smart phones, tablet computers, and other portable electronics from Apple, Samsung, Motorola and other manufacturers. It produces and sells its cases through cell providers and various retailers.

Otterbox designs, manufactures and sells cases for mobile electronics that stand-up to the rigors of daily use and abuse.  The company’s products have a well-earned reputation for quality and ruggedness.  REALTREE, a brand also synonymous with the ruggedness and the great outdoors, approached Otterbox about five years ago and Otterbox decided to give REALTREE’s camo a try on its most rugged offering, the Defender series.  The Defender cases in REALTREE camo are offered by all of the major cell carriers along with all of the major outdoors retailers.

The cases have been extremely popular with consumers. After the first year, the Defender case in REALTREE camo accounted for 20% of Otterbox’s total revenue.  In every one of the past four years, two of the REALTREE cases have consistently been among Otterbox’s top 10 selling SKUs.

The Defender series has always been a masculine case however, once Otterbox introduced the Defender in Realtree AP Pink the case was an instant hit with women.  Not only did it attract outdoors women looking for a more feminine option that could stand up to the rigors of the outdoor lifestyle, it also appealed to women who considered the pink option a fashion statement.

Otterbox and REALTREE have been fully committed to making the REALTREE camo Defender a success story.  They both heavily promote the cases to all of their retail channels providing exposure to both partners that would not ordinarily be available.  According to Robb, “They [REALTREE] started inviting us to tradeshows and introducing us to different channel partners that got us on the road to new partnerships that never would have happened or would have taken us years to foster.”

“It was magic when the Defender and REALTREE got together.  It lifted and extended both brands.”

“REALTREE is an integral part of our business.  They truly have our best interests at heart.  They continue to bring us new opportunities and bend over backwards to make us happy.”

The Realtree licensing partnership was Otterbox’s first, and to date, the most successful.  According to Robb, “It was magic when the Defender and REALTREE got together.  It lifted and extended both brands.”  The partnership has been so successful Otterbox has sought out agreements with other companies in the hopes of replicating this same level of success.  Otterbox considers its relationship with REALTREE to be a true partnership.  Robb stated, “REALTREE is an integral part of our business.  They truly have our best interests at heart.  They continue to bring us new opportunities and bend over backwards to make us happy.”