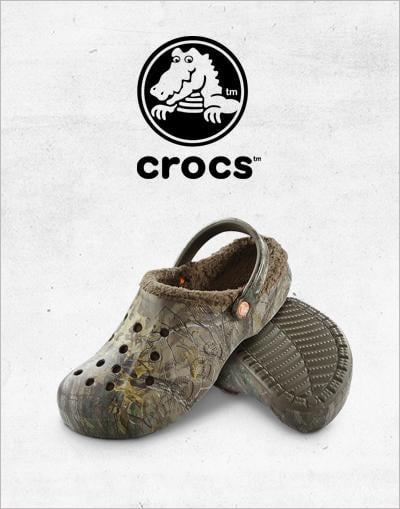 Crocs, Inc. is a world leader in innovative casual footwear for men, women and children. Crocs offers a broad portfolio of all-season products, while remaining true to its core molded footwear heritage. All Crocs shoes feature Croslite™ material, a proprietary, revolutionary technology that gives each pair of shoes the soft, comfortable, lightweight, non-marking and odor-resistant qualities that Crocs fans know and love. Crocs celebrates the fun of being a little different and encourages fans to “Find Your Fun” in every colorful pair of shoes. Since its inception in 2002, Crocs has sold more than 300 million pairs of shoes in more than 90 countries around the world.

Crocs approached Realtree because it wanted to expand its appeal beyond sport enthusiasts to hunters and outdoors consumers.  Crocs knew that Realtree camo would appeal to hunters and those who enjoyed the great outdoors.  Realtree immediately recognized the value of a relationship with Crocs and jumped at the opportunity.

Crocs introduced Realtree camo on its classic clogs and it immediately took off.  Before long, Crocs expanded its line of shoes with Realtree camo including styles for women and kids.  Women have embraced Realtree Crocs not only because of their comfort but because they are sleek, stylish and give women a way to express their love of the outdoors lifestyle.

"Realtree is Crocs’ number one licensed property in the US.  This is no small statement since we have licensing agreements with some of the largest franchises in the country."

Although getting Realtree camo to transfer accurately on Croc’s proved to be difficult, the effort was very worthwhile.  According to Greg Thomas, Senior Manager – Global Licensing, “Realtree is Crocs’ #1 licensed property in the US.  This is no small statement since we have licensing agreements with some of the biggest franchises including all of the major sports leagues, Disney, Warner Bros., Marvel, Hello Kitty, and Nickelodeon, just to name a few.

Crocs currently operates over 500 retail stores in the US and abroad as well as Crocs.com.  Crocs’ Realtree camo shoes are always featured, providing a major boost in sales to all of the Realtree camo products.

When Crocs and Realtree first entered into a licensing arrangement, the agreement was for a longer duration than is typical for the fashion industry.  However, Crocs and Realtree continue to renew the partnership without hesitation.  Aside from the popularity of camo Crocs, the relationship between Crocs and Realtree has survived the test of time because both companies have a similar business philosophy; “Keep it Simple”.