In 1979, British band the Buggles released their biggest hit, “Video Killed the Radio Star,” a musical lament chronicling the rise of video and the fall of radio. It was, in fact, the first video ever played on MTV, August 1, 1981. If such a song were written about today's advertising world, it might be justly re-titled as, “Online Video Ads Are Killing the Competition.”

According to a study by Business Insider Intelligence, online video ads get much better click-through rates compared to other types of digital advertising. The chart below shows video ads get 3 times more action than mobile – its nearest competitor – while Display and Flash advertising lag farther behind. 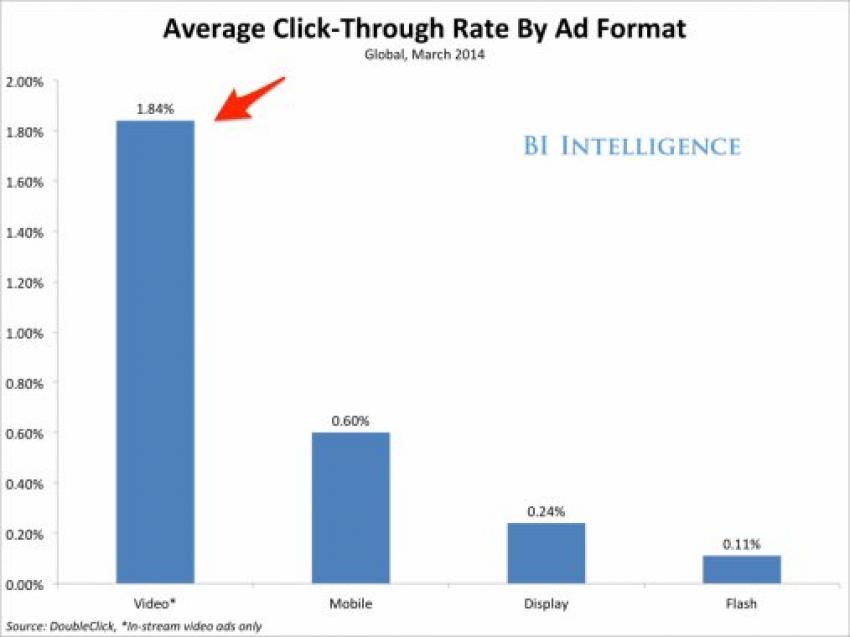 Such heightened results are attracting the biggest of big businesses, looking to grab the attention of potential customers before they “surf away” to another site or page. Emarketer.com summarized the findings of a study by Pixability that found Wal-Mart, Target, Lowe's, Amazon and The Home Depot to be the top 5 buyers of YouTube video ads in 2015. By the 4th quarter of 2015, Wal-Mart and Target alone had spent more than $4.4 million on digital video. And consider the huge jump in video buys by Target, from just $57,000 in Q1 to nearly $1.9 million by Q4. 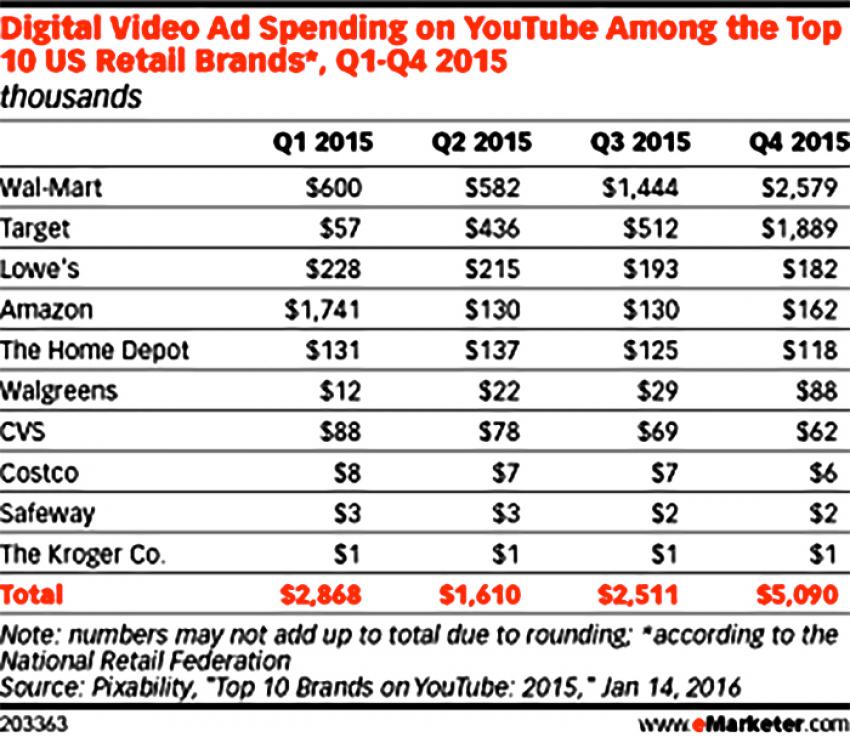 The Emarketer article ("Retail Brands Continue to Advertise Heavily on YouTube") suggests the increase in digital video ad spending corresponds to Google's introduction of  "Shopping Ads for YouTube," which allows advertisers to promote products outside their own videos, opening up new sales channels.

Video, it seems, is the best way to keep eyes on the screen. Business Insider reports that video ad views surged past 35 billion views in December 2013, with an average year-over-year monthly growth of 100%. BI projects that online video ad revenues will increase by 56% over the period from 2013 through 2016, while TV ad revenues are predicted to drop during that time period close to 3% each year.

And because YouTube video ads aren't bound by the same restrictions as traditional TV or radio spots, businesses have the freedom to reach out, connect, interact and be more creative and personal than ever before. In June 2015, Thinkwithgoogle.com published, A Decade of YouTube Ads: The Top Ads and The Trends That Define Them. Among the 10 trends culled from their research of the previous decade of YouTube ads, Thinkwithgoogle.com reminds advertisers to: “Be authentic”; “Take the time you need to tell your story”; and “Have fun with ad formats.” They note Nike's “Winner Stays” video, which runs more than 4 minutes, has received more than 115 million views. That would be nearly impossible to pull off without online video.

Adweek's “3 Trends Transforming How We Watch Ads – What the year-end YouTube Ads Leaderboard tells us about the future of video advertising” summarizes the commonalities of the most-watched YouTube ads in 2015. One of the key takeaways is that millennials may not be watching traditional TV, but they are consuming online video ads with mobile phones and tablets. In essence, online video has become “mobile video.” The article notes that on YouTube in 2015, for the first time there were more mobile views than from desktop devices.

What does this mean for marketers? It's time to take YouTube marketing seriously, even if piggy-backed with TV ads.  Adweek examined  3,000 American ad campaigns to determine the impact of shifting some TV ad dollars to YouTube ads. They discovered that, “without spending an extra dollar, 46 percent of campaigns would have benefited from a TV and YouTube combo, with an average increase in millennials reached of 42 percent compared to TV alone.”

Whether you market boots, bows, T-shirts or seat covers (you name it), if you're marketing outdoors, part of your efforts should be focused on YouTube video ads. Be creative. Connect across more channels. Get more click-throughs. And capture a bigger piece of the millennial market all at the same time.