Remington, America’s oldest gun maker, and Realtree, America’s most respected camouflage pattern designer, continue their valued partnership with the latest Realtree Timber camo V3 Turkey Pro and Model 870 41 Turkey TSS shotguns. These shotguns exhibit the quality performance and engineering that have made Remington firearms the go-to for sporting enthusiasts for more than 200 years.

Successful turkey hunters know the key to luring our gobbling friends in to that perfect shot is concealment.  Remington has teamed up with Realtree as one of the leading camouflage brands to tip the odds in your favor.  This is where tradition meets innovation and beard collections grow.  Stand out by blending in with Realtree and Remington.

Remington, the largest U.S. producer of shotguns and firearms, still produces guns at a sprawling brick factory in Illion, New York, that has existed since the mid-1800s. Remington’s research and development facility – the Rock – is located in Huntsville, Alabama, and sets a high-performance standard for others to follow. Remington continues its American firearms heritage by expanding, building new plants and acquiring new companies to meet the challenge of increased demand.

The latest Realtree Timber camo shotguns display the same ahead-of-its-time innovation that was featured in the first rifle hand-built by Remington founder Eliphalet Remington in 1816. 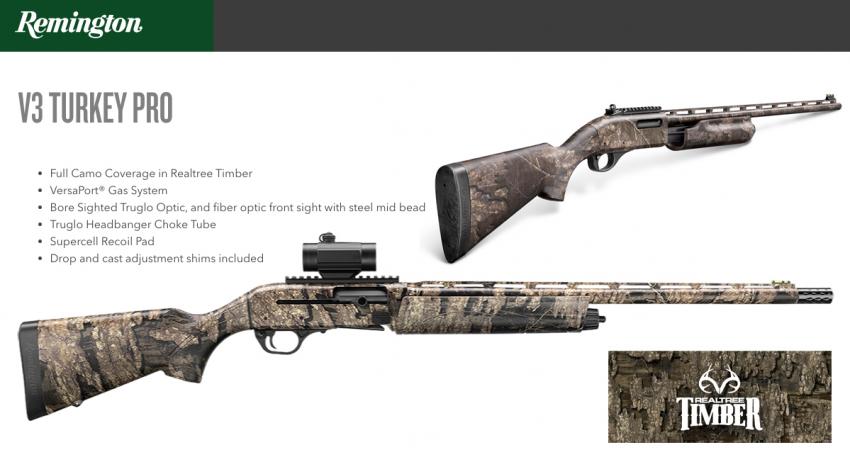 Remington V3 Turkey Pro in Realtree Timber camo is ready for the hunt with a 40-yard factory bore-sighted Truglo Optic and Truglo Headbanger choke tube. Like all Remington autoloaders, the V3 Turkey Pro is built right here in the USA. The V3 delivers unfailing reliability and super-soft recoil into a sleek platform with athletic handling and pointability. It cycles everything from lightweight 2¾-inch target loads to the hardest-hitting 3-inch mags with the same unrelenting consistency.

Like all Model 870 shotguns, the Model 870 41 Turkey TSS in Realtree Timber camo features a receiver milled from a solid billet of steel for maximum strength and reliability. The super-smooth twin-action bars prevent binding and twisting so you don’t lose that chance for a second shot. 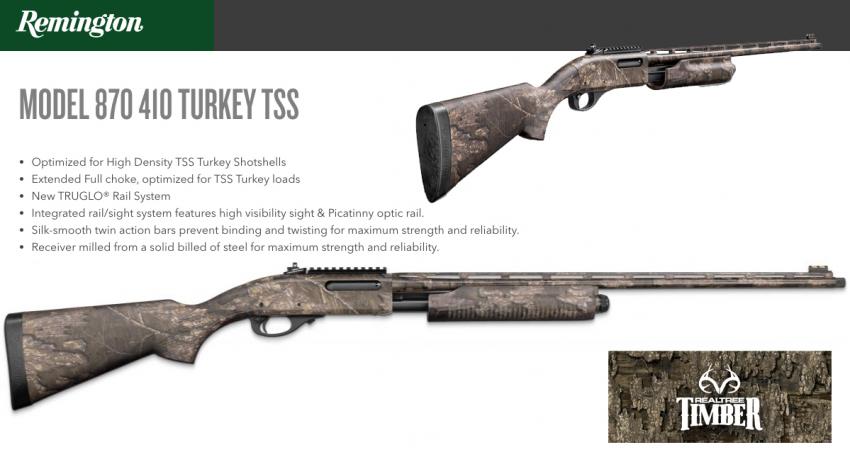 The solid, dependable action and continual upgrades make for an advanced, well-rounded family of pump shotguns. Along with continually evolving designs, this shotgun’s superiority is a result of rugged dependability, great pointing characteristics and versatility. In fact, the Model 870™ has been the standard for slide-action performance for more than 60 years.